Let's see what happens when we all work together

I have been at this race directing thing for a few years now and have mostly learned on the job and I have always thought there should be a race director's symposium of sorts for local directors so we can each learn from each other. So, being an organizer I put together a list of local directors and organized a meeting.

We had our first get together yesterday, and while not everyone showed up we had a good mix of people. A trail running company, a company that has been around for a while with some seasoned vets, us and I reported notes to another road racing and tri company. I think it showed how much better we can be as a team rather than trying to each individually reinvent the wheel each and every time. We can be a united front when trying new things with the City, or with marketing or with any number of things. Sometimes you just need some friends.

The best thing I think happened is the beginnings of an initiative to keep things local. The retail world has a 'shop local' campaign, why not a 'race local' campaign? It would raise awareness of where your racing dollars are being spent, which local companies are putting on these races and which local nonprofits are being helped. Perhaps a logo on each and every race? Perhaps one day where we all give a discount to you, the local runner, perhaps a package deal or a punch card or one day where we push a run local campaign.

Now we just need a snazzy name for ourselves!

Do you have any ideas that you would like to see happen on the national running race scene?
Posted by Ilana at 5:14 PM No comments:

I helped a friend move and all I got was this awesome cone! 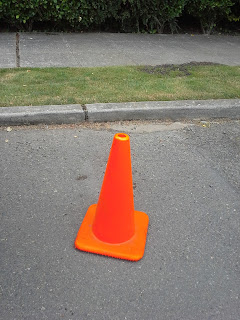 Yes, that is right. I helped a friend move today in exchange for her letting me keep a cone that she had. Pathetic, I know! I love cones!
Posted by Ilana at 3:46 PM No comments:

Subject: Bernard Lagat (@LagatUpdate) is now following you on Twitter!

I have never really understood Twitter, what it can do, what its point is, who actually looks at it. I guess that is why we have an awesome Marketing and Communications intern, someone who can really utilize this tool in a way that I never understood.

Regardless, it was thrilling when I woke up to an email from Twitter with the above subject line. Really!? Bernard Lagat follows Run for Good!? Well, I won't question and I will accept the following of a really famous awesome runner. Hello Bernard, should I tweet about you following us? Will that even be seen by anyone?

Is anyone famous following you? Are you following us on Twitter? 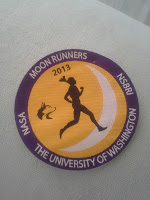