What a difference 6 months makes

Last week I ran the Paris Marathon, 6 months ago I ran the Winthrop Marathon. Paris had 57,000 participants, Winthrop had 98.

The Winthrop Marathon was a study in how to get a great race off the ground. Race Director James Varner always does a great job making it look easy. It's nice to know your Race Director by name and get some personal attention at a marathon.

On the other hand, the Paris Marathon was a study in crowd control and differing cultures.

Every American should do a race abroad, it shows you a side of the culture you would never have otherwise seen; Men, and women, taking potty breaks right on the side of the road, no need for modesty, the look of disgust from onlookers if you should dare to take a walk break, the different words of encouragement in a foreign language (at least you hope its encouragement!), the lack of porto-potties, the national pride almost everyone shows, the running outfits and the food and water options that the country of your choice chooses to hand out. I have to admit, running the streets of Paris was a treat, even if I had to share the roads with 56,999 other people.

From a Race Director's prospective it was a sight to see. The amount of work put in to make a race of that size work is mind boggling. Even one little aspect of it is enormous. An example - each participant got a bag, filled with coupons, flyers and product samples. Can you imagine the hours it must have taken to stuff 57,000 bags, and those race packets!? 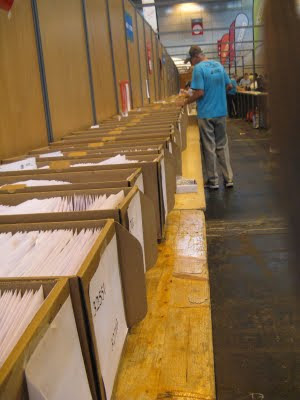 Most everything about the race organization was well handled, efficient and easy for the participant. From all the helpful (although sometimes awkwardly translated emails) to the packet pickup to the logistics of the race start and the finish line and all the cheering volunteers, it was a well run race.

One would imagine that with 57,000 nervous and well-hydrated runners that one would provide many, many, many porto-potties. It was interesting to note that they had not done that. The day before the race I was sight-seeing, which took me to the Arc de Triomphe, the site of the start and finish lines. I had seen about 8 toilets, really, 8 toilets? I thought for sure there would be more delivered in the middle of the quiet Paris night. Nope, there was just a lot of very unpleasant, overused bathrooms, lets just leave it at that!

The other curious thing was the way they handled the waterstops. They chose to hand out not cups of water, but bottles, at each water station, to each person. If you can imagine the bottle caps and bottles that must have left behind. And, on top of that they handed up banana halves and oranges. At each station you really had to watch your step and not find yourself the subject of that all too classic banana peel prank. It felt like a cruel joke! My biggest gripe at marathons is the lack of salty snacks along the way, especially on a hot, sweaty day. Give us a pretzel! Please!

I did appreciate the wine I downed at Mile 25, that was a nice treat!

The finish area was complete chaos, to be expected I suppose. Smart of the street vendors to show up and provide me with a huge heaping portion of pomme frites, so salty and good!

An amazing site was to see later that evening, beneath the shimmering lights of the Eiffel Tower, where there once had been a waterstop, there now was a gleaming clean street. How they managed the cleanup so fast and so thoroughly I will never know.

Kudos to the Paris Marathon organizers, and thank you for letting me run through your gorgeous city, allowing me to indulge in your pastries without any of the guilt.

Here is a bonus pic: a GIANT cone in Paris, right outside of the Grand Palais, others might take a picture of the beautiful architecture, not me, I like to take a pic of the foreign cones! 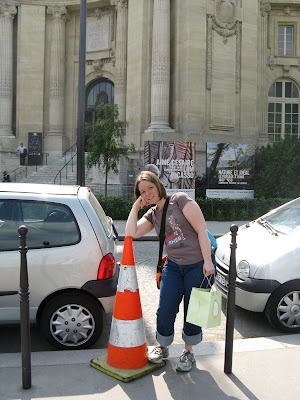 It's funny what happens to your mail when you open up a business. I used to get the usual host of catalogs; Eddie Bauer; Title Nine; Road Runner.... Now I have seen a subtle shift, a shift that is making me question what I have gotten into. Not only do I get the normal business junk mail like offers for credit cards, catalogs for business checks or medical insurance solicitations, but now I seem to have attracted some pretty strange stuff.

The other day I got a Uline catalog. Do you know Uline!? You should! It was a thrilling 300 pages filled with mailing supplies, tapes, scales, special UV wrap, protective suits, pallets and all manner of strange looking metal supplies.

Yesterday I received a catalog for medals and awards. Now, as a race director this is some really riveting reading. It opened up my eyes to the costs of cheesy crystal awards and cheap metals and pins. I envisioned the race logos on all the items. What more could a race director ask for!?

It makes opening the mail everyday a thrill rather than a dread bore of more and more bills. So, the upshot? If you want interesting mail become a race director!
Posted by Ilana at 6:44 PM No comments: